***
Ian de Massini read Music at the University of Cambridge, having gained a choral scholarship to the choir of King's College Chapel. Upon graduation, Ian was appointed Assistant-Organist for the Church of St Alban, Holborn, in London, followed by a similar position at Ely Cathedral, before then founding his own choir and orchestra, Cambridge Voices, and The Orchestra of the Age of Reason, both about to celebrate their 30th year of concert-making. Ian is now Director of Music for St Columba's Church, Cambridge, and is Senior Member at both Hughes Hall, and at King's College, at the University of Cambridge. For many years Ian was also the musical-arranger, accordionist, and Prima Donna for the iconoclastic classical-music comedy duo, The Classic Buskers, formerly known as The Cambridge Buskers.

In relation to the keyboard, Ian recently made the very first recording of the complete piano works of the great 20th-century French composer, Maurice Duruflé, including his own piano transcriptions of Duruflé’s ravishing orchestral music, whilst his choir, Cambridge Voices, won the Prix d’Or (Gold Medal) from the French classical music magazine, Diapason, for their recordings of Duruflé’s complete works for unaccompanied choir, and Duruflé’s  celebrated Requiem, all recorded in Duruflé’s magnificent church of St Etienne-du-Mont, Paris. But it is the championing of Bach’s keyboard works that lies at the heart of Ian de Massini, all of which he plays from memory, alongside the keyboard music of Messiaen, Duruflé, Ravel, and Alain.

We're delighted to announce that St Clement's will be hosting a lunchtime recital series throughout Saturdays in July, showcasing talented local musicians and enjoying the fine acoustics of the church for chamber music.

Recitals will begin at 1pm, with free entry to all. Donations and a retiring collection will be taken, with proceeds helping to support both the development of music further in the church, and supporting the musicians performing at St Clement's. All are welcome! 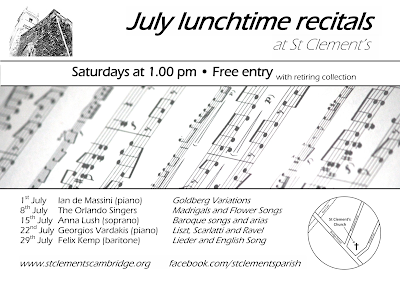 Posted by St Clement's Church, Cambridge at 10:30 No comments:

Join us for a Choral Mass tomorrow morning at 10am as we celebrate Pentecost, as well as the culmination of the Thy Kingdom Come week of prayer.

We will be we welcoming Bp David Thomson (Bishop of Huntigdon) to celebrate and preach for us. Choral music will include Darke's Collegium Regale Communion Setting, and Shepherd's The Secret of Christ. All are welcome.

Posted by St Clement's Church, Cambridge at 16:30 No comments:

Taizé Eucharist in anticipation of Pentecost

Please join us this evening for a service of prayer, chanting and silence as we celebrate Eucharist in anticipation of Pentecost. All our welcome, and we hope to see many of you there. Our service begins at 8.30pm, though the church will be open all day and well into the night for those wishing to step in at any time. 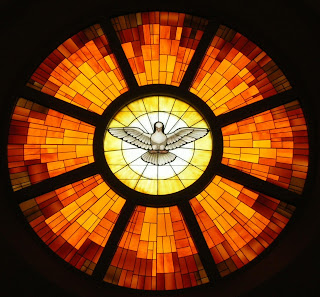 Posted by St Clement's Church, Cambridge at 08:00 No comments:

Welcome to our blog, hoping to keep you up to date with the latest news and events at St Clement's. Please visit regularly for updates on what's happening in our church, and check out our Website and Facebook page for more information.